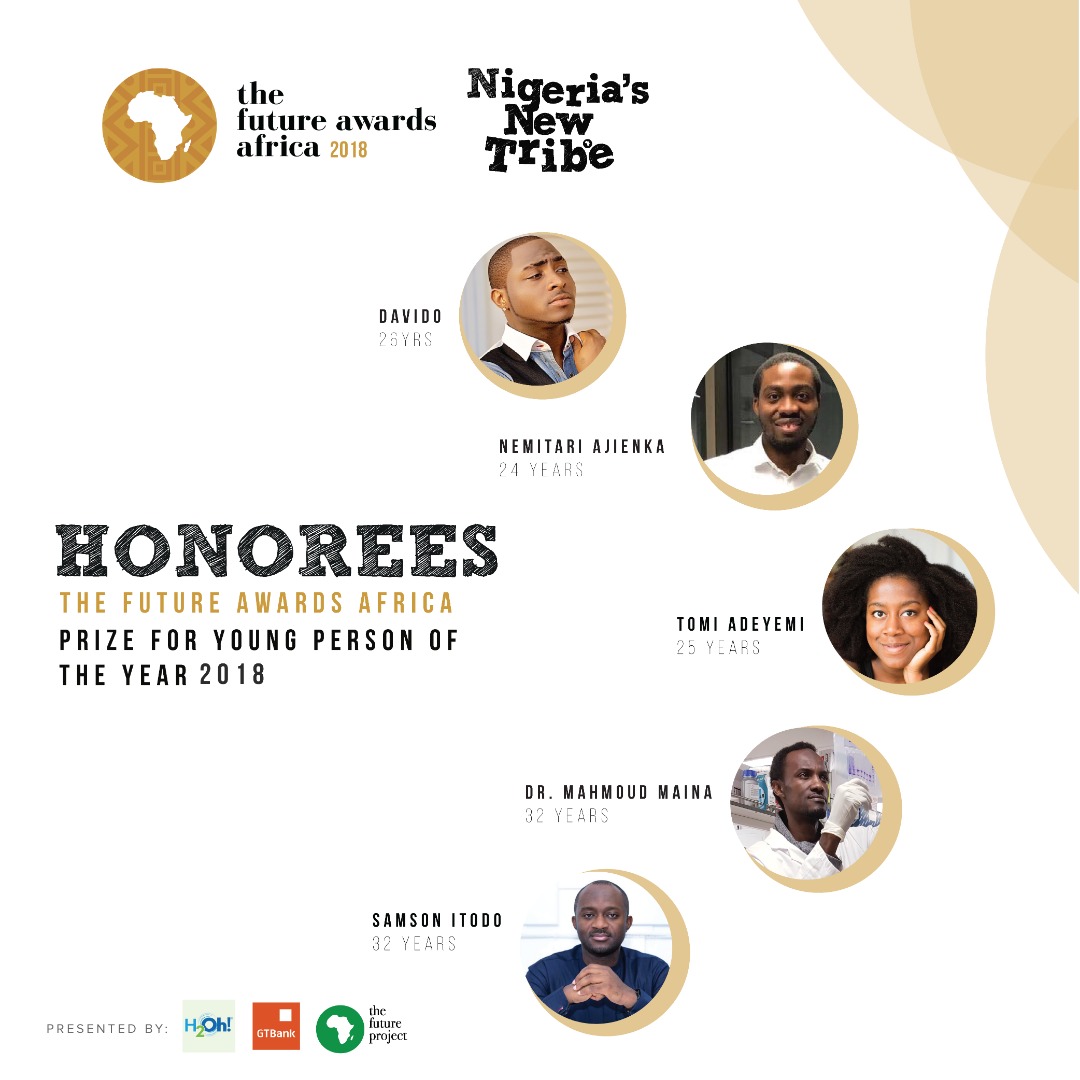 The Central Working Committee (CWC) of The Future Awards Africa has unveiled the list of honorees for the most coveted youth award on the continent, the Young Person of the Year – David ‘Davido’ Adeleke, Samson Itodo, Tomi Adeyemi, Nemitari Ajienka, and Dr. Mahmoud Maina.

This prize is awarded to a young person who has become a force for change, capturing the collective imagination of all Nigerians through their achievements, public image, and personal triumphs. An individual who has demonstrated intuition, innovation, and initiative and is not afraid to lead change in his/her industry.

The awards event which is set to hold on 16 December 2018 celebrates innovation among Nigerians between the ages of 18 and 31 (in the period of review) and acknowledges inspiring young people making a difference through social enterprise, social good, and creativity.

The Future Awards Africa 2018‎ is presented by The Future Project, Guaranty Trust Bank, and H20. The official hashtags for 2018 are #TFAA2018 and #NigeriasNewTribe.

Far too many people think the academia is boring and staid. This assumption has come from decades of exclusionary politics that have alienated young people of every generation from excelling through a complex web of financial quotas, interdepartmental politicking and the very nature of academia which demands that a person devote the brightest years of their lives in the pursuit of knowledge. Not many people are able to summon the sheer volumes of resolve it requires to take on this monumental challenge and succeed, and this is why Nemitari Ajienka is such an inspiration to young people everywhere.

At the age of 24, Ajienka was granted the status of lecturer at the Edge Hill University in the United Kingdom, the youngest lecturer to achieve this feat in the University. Ajienka’s feat only becomes more astounding when you consider that he also completed a bachelor’s degree, Masters and a PhD all in this time, excelling at every level. As a pioneer in computer science, Ajienka’s excellence and commitment to education is not only a feat of inestimable genius, it is also a source of inspiration to young Nigerians everywhere, discouraged by the tangential shift into entertainment and sports as the only viable routes to fame and success. Ajienka proves excellence can be had no matter what you choose to devote your life to.

Politics in Nigeria is seen as a dirty game, and very few people step into the fray and come out the other end with their integrity intact and their objectives achieved. Samson Itodo is one of such vanguards. Itodo has been in politics for a long time, working and mobilizing young people at the grassroots level through the Youth Initiative for Advocacy, Growth and Advancement (YIAGA), a non-profit committed to serving as an alternative to political parties and providing a united front for young Nigerians to advocate and demand democratic governance. The non-profit uses research, capacity development through investments in human capital and advocating for policy change that betters the lives of Nigerians.

In 2016, Itodo, in collaboration with Hon. Tony Nwulu, helped sponsor the ‘Not Too Young To Run’ Bill, a piece of legislation that sought to challenge the pre-independence laws that set the ages for participation in federal, state and local government elections. The existing laws precluded younger people and offered basic expectations for eligible candidates. Under the leadership of Itodo, who used political think tanks, lobbying and citizen advocacy, YIAGA was able to push the bill through the Senate and eventually to the desk of the President, where it was signed as a landmark victory for all Nigerians. The trajectory of the 2019 elections has changed drastically thanks to the work of Itodo through ‘Not Too Young to Run’. One thing is certain, Itodo has changed the course of Nigeria’s history and etched his name in the stars.

Few Nigerian artistes have experienced a comeback as enduring and fantastic as David Adeleke, the inimitable Davido. He released a slew of songs, led by the charismatic ‘Fall’ and ‘If’ which made the careers of half a dozen artistes and producers including DJ E-Cool and Teni the Entertainer and started a new label that signed Mayorkun and Peruzzi, now superstars in their own rights. Davido grew up, shedding his bad boy image and embracing fatherhood and a long-term love interest to the admiration of his adoring fanbase.

But Davido’s biggest triumphs in 2018 have been his personal and professional challenges. He forced the international media giant Viacom and its subsidiary BET to acknowledge the contributions of African artistes to global music by demanding that the winners of the BET ‘Best African Act’ be awarded their plaques on the main stage alongside their global contemporaries instead of quietly at a pre-event, and hosted a slew of sold out concerts across the world, promoting his Nigerian heritage and changing perceptions about the country and continent.

There are few ambassadors as worthy of Person of the Year as David Adeleke and we acknowledge and praise his growth.

In the last decade, Nigeria has been forced by the worst of prevailing circumstances to come to terms with its failing healthcare system. It has also been forced to acknowledge the incredible effort its doctors have put in their craft, their resilience, and innovation in the face of a failed system and their endless commitment to saving every life. Dr. Stella Adadevoh was our turning point, and Dr. Mahmoud Maina is our way forward.

Dr. Maina is a researcher and scientist who is distinguishing himself in global medicine through his ground-breaking research in degenerative disease and how our understanding of these diseases can be enhanced through science. In 2018, Dr. Maina’s progressive research into Alzheimer’s disease, a degenerative disease that affects memory, unveiled complex proteins that contribute to the progress of the disease and his current research is probing to find out how they can contribute to better diagnosis or therapeutics for this devastating disease. Maina understands the challenges of other doctors in Africa to find funding for research and mentor other African scientists through  TReND in Africa, an educational NGO that helps attract funding for the creation of world-class laboratories and research facilities across the continent. He created the Science Communication Hub in Nigeria, a platform that engages the public through science and his science outreach programmes connect scientists to students, teachers, and government officials.

He has been lauded with awards for his work, including the New Researcher Science Communication Award by in the Royal Society of Biology.

There has been a lot of discussion around the absence of black women of African descent in the science fiction and fantasy literary genres. So when a fantasy writer of Nigerian descent not only successful debuts a three-part fantasy series based in Nigeria and featuring two female protagonists, her work breaks many ceilings for women and inspires a new generation of Nigerian girls to indulge their imaginations and create their own worlds.

Tomi Adeyemi is only 25, but she is already a force to be reckoned with in the literary world. Her debut novel Children of Blood and Bone centres a hybrid of Yoruba culture and fantastic elements and repositions African features such as albinism and kinky hair as beautiful. Her three-part book series was sold for an unprecedented million dollar deal. The popularity of her work led to Fox 2000 adapting it into a film, with a seven-figure deal being reported. Tomi also teaches creative writing to the 4,500 people subscribed to her website, and her website was named as one of the 101 best websites for writers by Writer’s Digest.

Adeyemi’s book and her philosophies on literature are an important touchstone for Nigerian girls. Her success emphasizes that education and the opportunities it provides are invaluable if we are to raise a generation of girls who value their autonomy and want to pursue their dreams.