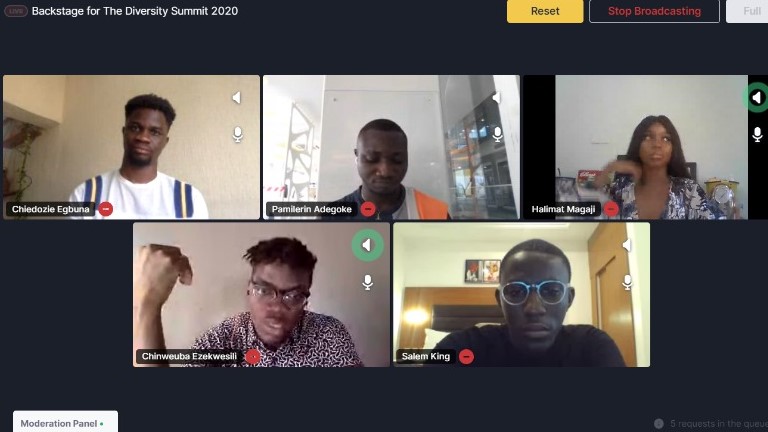 The Summit which brought together over 100 of the most influential voices and thinkers across Africa was themed, ‘We can’t breathe: Exploring power, privilege and the potential for real change’.

Delivering her keynote address, the Principal Officer of the U.S. Consulate General in Lagos, Claire Pierangelo, stressed the importance of mentorship and investment to the achievement of Africa’s development agenda, saying, “We have worked hard to establish strong ties between the United States and other countries and one way we have accomplished this is through our exchange programmes. We have introduced specific programmes like the Young African Leaders Initiative (YALI) because it is on the youth to spur growth and prosperity, strengthen democratic governance and enhance peace and security issues across sub-Saharan Africa.

“To all the outstanding nominees, congratulations on your accomplishments! I urge you to all to look beyond yourselves and your success by mentoring the next generation. When you use your skills and your expertise, to help others grow, you will contribute to Africa’s growth and development and there is nothing more important than that,” she added.

The panel sessions which included topics such as; Toxic Environment: Climate change and African governments; Nigeria is not America: Importing Western battles into Nigeria; The Vagina Dialogue; Not too young to run: Will young people in government actually change anything?; What were you wearing?’ How not to talk about rape; amongst others featured a few hot takes.

Offering her two cents on whether Generation Z (Gen Z) will succeed where millennials are failing, Digital content creator and fashion consultant, Halimat Magaji argued that the radical and liberal mindset of the younger generation puts them in the best position to facilitate positive changes where millennials have failed.

“The Generation Z has a better mindset to change than any other generation as they are radical and liberal. This is the first generation to have grown up entirely in a post-deference, digital era. Despite all the criticism, Gen Z has already started to shape national conversations, changing debates about gender and sexuality, now challenging police behavior and calling the government to order. There is, however, a need for collaboration among generations to avoid making the same mistakes,” she said.

Commenting on the possibility of young people in government making a change, the Country Officer of the Open Society Initiative for West Africa, Ude Ilo stated that, “There is nothing in the present political system that young people can learn from because the bureaucracy as presently constituted cannot be altered.” “Young people should consider changing the system from the top,” he added.

The Diversity Summit 2020 was a part of the 3-day virtual execution of The Future Festival 2020. The recorded sessions can be viewed on YouTube via @TheFutureProject.

The Future Festival 2020 is presented by The Future Awards Africa in partnership with Y! Africa.

About The Future Awards Africa

The Future Awards Africa has been called the ‘Nobel Prize for Young Africans’, and the ‘most important youth awards’ by Forbes. It is a set of prizes given annually to celebrate and accelerate innovation, creativity and enterprise amongst young Africans aged 18 – 31. It has produced over 150 winners and over 1550 nominees since its first edition in 2006.It is presented in conjunction with The Future Project, which has a mandate to build empowered citizens across Africa, through (inclusive) enterprise and (active) citizenship. This focus on Human Capital Development is informed by our value proposition: Africa’s growth needs a generation of young people who are gainfully employed and able to demand and secure better leadership.

Red Media Africa (www.redmediaafrica.com) is the PR & Empowerment Marketing division under the parent brand, RED. It focuses on using inspiration, empowerment and action to help brands and organisations connect with their audiences, enhance their bottom-lines, and lead in their industries. It has 6 major practice areas: Corporate Practice, Technology Practice, SME Practice, Governance Practice, Faith Practice and the International Practice – with work for brands across Nigeria, Ghana, Kenya and South Africa. It has been recognised with multiple local and international awards including the Gold SABRE Awards for PR Campaigns and the Young Lions PR competition for the next generation of creatives.