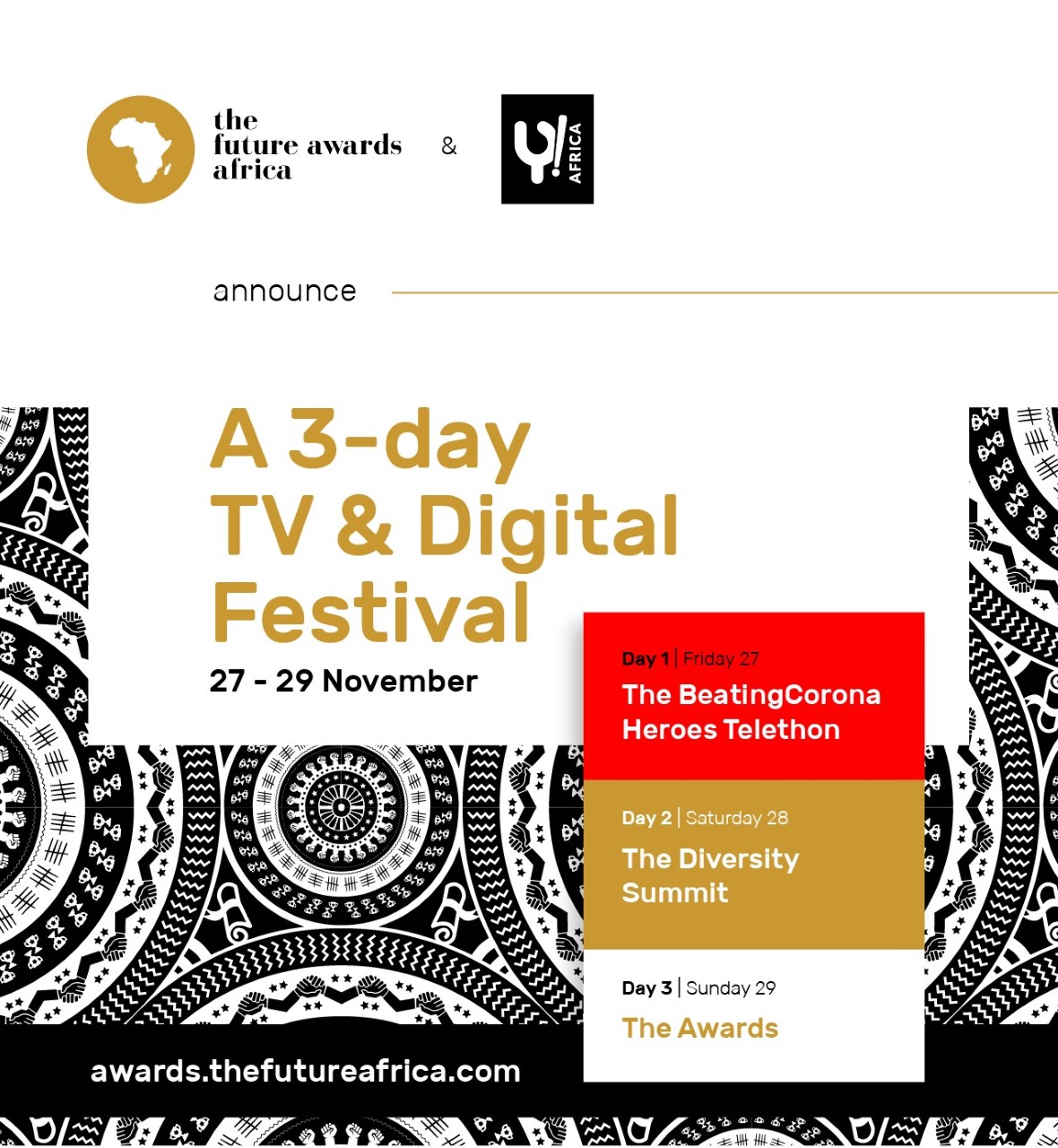 In a bold move that pioneers a new way of delivering immersive event experiences in the age of Covid, The Future Awards Africa in partnership with Y! Africa has announced The Future Festival 2020 – a 3-day TV & Digital Festival to celebrate the transformative power of youth, especially in 2020. The festival holds from 27 – 29 November.

The Future Awards Africa (TFAA), are a set of awards given by The Future Project (TFP) to honour and celebrate young people between the ages of 18 and 31, who have made outstanding achievements in the year under consideration.

“A 3-day TV & Digital celebration of a generation coming into its own power – through diversity, inclusion, and accountability culture,” says Ayobola Eniola who is co-producer of the show this year. “The Future Festival will celebrate emerging youth power – with the average age of 27. It celebrates young people who are coming into their own, set to be the leaders of the culture, of industry, driving the conversation, dictating trends, upsetting old orders and creating new possibilities.”

The three-day event is broken down thus:

Day 1, Friday: The BeatingCorona Heroes Telethon celebrating those on the frontline of helping the continent in its continued fight against Covid-19, across the entire spectrum of well being and growth including emotional health, supporting businesses and rebuilding communities. This will be a 10 minutes broadcast at the top of the hour from 9am to 6pm.

Day 2, Saturday: The Diversity Summit, which tackles all the issues that are top of mind of young people in terms of diversity, inclusion, and equality fromo identity to spirituality, capitalism to the environment, special needs to human rights. This summit will also be the biggest gathering of the most influential young people working and leading conversation on these issues. This is a 6-hour summit with 5 panels each hour from 12pm to 6pm.

Day 3, Sunday: The culmination of the entire festival – this celebrates young people who are breaking boundaries and crashing ceilings in 21 categories from Film to Fashion, and Technology to Engineering. The awards will also feature mind-blowing music and other performances featuring culture drivers from across the year, produced with spectacular production values by some of Nigeria’s brightest directors, stylists, and creatives. This is a 2 hour, 30 minutes event hosted by two of Africa’s hottest music stars, and will be helmed by a pre and post award review show hosted by two of its hottest OAPs.

“The Future Festival will be the biggest gathering of young people who have shaped the culture across Africa – from beating Corona to kicking it with Beyoncé – in 2020,” says Bukonla Adebakin, who is chief operating officer of the presenting company, RED.

Nominations are still on via awards.yafri.ca along with more information about the awards, including the judging process and the regional jury members from across Africa. You can also follow @tfaafrica on Instagram and Twitter.